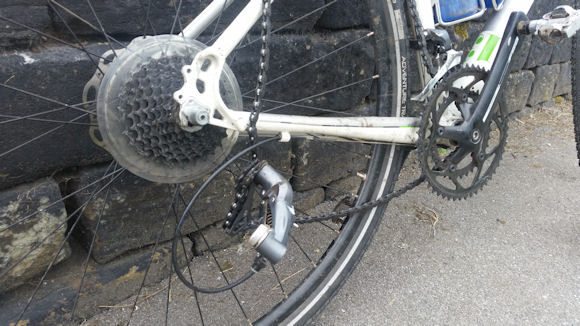 Today was to have been my last ride on cycle tracks and canal towpath on ‘Birthday’ Bike. I had decided that before today’s happenings. Never should have ridden tracks on this bike really BUT that was the reason for getting a CycleX. I should have been ok to ride on them BUT on the other hand I had bought the bike from Halfords! I rest my case!!

When I say, I bought the bike, ‘I’ didn’t, my family clubbed together and gifted it to me for my birthday last June, hence why I refer to it as my ‘birthday’ bike.

I’m not really into naming inanimate objects, the closest I come is ‘Birthday’ bike and ‘Blue’ bike, yes, my other bike is blue. And when I say ‘other’ bike it’s what ‘birthday’ bike replaced.

The family said I needed a new bike on which to complete my Birthday challenge ride along with Coast2Coast ride as my ‘blue’ bike was knackered. I kept telling them ‘this one’s ok, nothing wrong with it’, BUT deep down I felt the excitement build at the prospect of a new steed.

One day, beginning of May 2016 Jay told me the family plan, that they had all chipped in for a new bike. I was so chuffed and overwhelmed, yes I shed a tear or two. I asked Jay if we could nipped down to Halfords, it being the closest bike shop, just to ‘have a look’…….

…. out I came with Birthday bike

I will sound extremely ungrateful now BUT I am not a shopper, of any kind. Food, presents, cloths, anything, I can’t abide it. If I HAVE to go, I need to go, get, get back, done (that will teach me). Next time I will give the pro shopper my inside leg measurement and ask they use their ‘better judgement’ in choosing the appropriate bike for me.

I did debate getting a full road bike as I prefer road cycling BUT I ride out with my Leggers Buddies most Wednesday’s and they use tracks and canal as do some of my family so I thought a CycleX would suit for both. That’s what it said on the bike.

I’ve had no end of trouble from ‘Birthday’ bike. I’ve lost count of the number of times I’ve adjusted the brakes, front derailer and gears (I know they need tweeking BUT EVERYTIME I go on it?!) Yes, I know a lot of this will be user error,  a bit of a heavy hand. It may have been me that taught Mel how to descend! His brakes bellow smoke on every downhill! (Mel you know they do, don’t deny it!)

Seven months on and ‘birthday’ bike‘s headset bearings went, luckily I was only going slowly at the time as the handle bars jammed solid as I turned a sharp corner on the exit to a tunnel…. That was a Wednesday with my Leggers Buddies too!

From Halfords, moving parts only have a 6 months warranty, so off to JB’s Bike Shop in Ossett for me, no chance i was leaving it with Halfords.

On Tuesday (yesterday 20th June) I went to JB’s to speak to Rob about the state of my bike. The chain had stretched so much that some of the gears were slipping like bambi on ice going uphill and I noticed a bit of play in the bottom bracket.

I left this saviour of a shop with Rob ordering;
Cassette (cogs at the back),
Chain (the snaky looking thing that goes around all the cogs)
Crank? (the big cog thing at the front that your pedals attach to)
Bottom Bracket (the bit that goes through the bike that is hidden by the crank?)

Suppose I shouldn’t really have gone out on it today BUT you know, that one last time and all. We weren’t going to be doing hills, so as far as gearing went I would be ok, that was until ……

… the canal towpath narrowed as it ducked under a small stone bridge. We all slowed, I was 6th out of 7. You could just make out and hear shouts of ‘steep cobbles’ as the front , cyclists, exited the bridge and immediately hit a short sharp cobbled 20ft section of towpath (should have taken a pic).

You could hear the clanking and click of rapidly changing gears. I had time to gently change down but as I hit the cobbles and I changed down again the back wheel locked with a bang. I had already unclipped one foot and was only moving slowly so had plenty of time to put my foot down.

I carried the bike to the top of the little rise thinking that the chain had come off and jammed between the cogs. BUT oh no, couldn’t be that simple could it!!

The derailer cage (the long metal thing that houses the tiny coggy wheels that the chain runs through) had somehow ended up bent and jammed into the top of the cassette (big load of cogs at the back). Try as we may, or as Chris may, it wouldn’t shift, it was jammed in there good and proper (didn’t get a pic of this, only the end result).

I needed to get it out as it was preventing the back wheel from turning and I would much prefer to push the bike to the train station as opposed to carry it. Chris flexed his manly prowess in one last attempt to free the derailer cage from the jaws of rear cassette and in doing so the mech hanger (the bit that attaches the derailer to your bike) snapped (which they are designed to do to protect the derailer).

Chris apologised for damaging the bike further BUT as I said to him ‘it’s knackered anyway, thank you for the use of your muscles, sorry for your dirty hands’ (hadn’t cleaned bike OR chain! sorry Chris).

I bid farewell to my Leggers Buddies as they cycled forth in the direction of Tunnel End at Marsden. Before setting of to walk the mile to Huddersfield train station I called Rob at JB’s Bike Shop to give him the good news that he needed to order a derailer along with everything else as this one was now goosed (I didn’t say goosed, I said foooocked!)

£3.20 from Huddersfield to Dewsbury, with the train at the station ready and waiting for my arrival (ok I was just lucky with timings) and lucky for me the bike space was free.

I stood next to ‘Birthday’ bike looking all forlorn. I leaned back against the wall to ponder my morning, back a bit uncomfortable, (fumble in back pocket), yes!, butties!!! I always feel better when stuffing my face, not that I felt bad or even sad just a bit miffed that I had to spend money, more money I didn’t have and my ride had been cut short.

Generally I take my own food, being one of those weird food eaters, oh, what do they call them, you know the ones that think food is going to kill them ….. oh, yes ….

‘My name is Jo and I am Coeliac’

I’d only cycled 11 miles and hadn’t earnt the peanut butter (awful stuff) chocolate (not much better) and jam (yes) sandwich BUT bye heck I was having it.

Got to Dewsbury, walked about .6 of the 1.3 miles to my car (yes I WILL state every point of a mile because I WALKED, another something I don’t do very often!) and remembered I hadn’t let my Leggers Buddies know I had arrived safely.

I took a pew on a bench at the back of Asda so to send the message. An employee from the store came and joined me asking if I was ok. I explained my broken bike and we exchanged pleasantries. He asked what I was going to do (I think he meant with the bike but i took it as do now), ‘go home and put my feet in the paddling pool to cool off!’.

Then, as if to rub salt into my broken bike wounds …. He started talking ……. about Golf!!!
Time to leave!!!

I know we’ve all got brilliant friends
that’s why we call them friend because they are brilliant….
A few minutes away from reaching the car my phone rang. My face lite up when I looked down and saw the name … it was only …. God of the North, Ginner, one of the best men I know and I know a few (now, now, not like that!).

I’d, obviously, posted my small dilemma on facebook, Ginner had seen it and rang to see if I needed picking up. This beautiful man lives about 25 miles away from where I was. I say no more, this speaks volumes about the man.

I put the bike on the car and went straight up to see Rob and show him the damage, yes a full derailer. Fingers crossed picking it up all sparkly new tomorrow.

Came home, put feet in the dirty paddling pool and it started to rain.

BUT do you know, I have had a lovely day today…….
Out with a lovely bunch of cycling buddies this morning.
Great camaraderie in addressing my brake down and sent me off with extra money just to make sure I was ok.
Enjoyed my enforced walks, that didn’t feel enforce as it was such a lovely day.
Went on a train, something I rarely do.
Saw beautiful architecture in Huddersfield and Dewsbury (look at Huddersfield Train Station)
Had a lovely chat with some bloke on a bench (until he started talking about you know what)
Ginner called to see if I was ok and if I needed a lift.
Rob at JB’s will have bike ready tomorrow.
Got to cool down in a dirty paddling pool.

So, it’s going to cost a few quid getting the bike fixed BUT hey, it’s only money!!!!

And now it’s lashing it down outside in the summer heat so I will end here as I am now going to run round the garden naked in the rain…… cos I can.

Thank you for reading my blurb, oh and if you wouldn’t mind please share the blog.

Have fun, smile and be thankful
Jo x

3 thoughts on “Not the Ride I Planned”