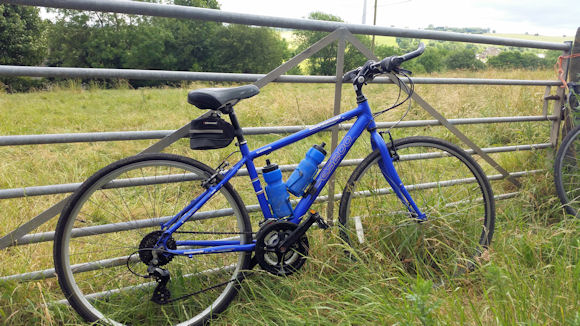 What a way to start day one training for my new challenge … the wrong way!

We’d enjoyed a fabulous time at BKCAT Cycle Circuit Family Day in Wakefield on Saturday. The two hour open circuit session was supporting Cystic Fibrosis, pop in a donation and away you went.

Everyone was there from club cyclists, both children and adults, down to the little ones on balance bikes. A fabulous facility.

Sunday Cycle
For my next challenge, I need to do hills, big hills and lots of them. My cycling friend Melvyn, who can climb a hill or two, offered to accompany me ‘to the hills’.

I haven’t really done much cycling since 22nd May so knew it would be hard going and because ‘I love’ hills (NOT!) it would be even harder.

As you may know I had a bit of an incident last Wednesday on my bicycle ‘Not the Ride I had Planned’ which saw it going to hospital, all mended now, well almost. It needed a bit of tweaking as the chain wouldn’t dropped down onto small front cog. With a bit of phone coaching from Melvyn it was almost there.

Great, bike already, food ready, now to get myself ready. What’s the last thing you put on before setting off to cycle? Shoes and Helmet? Yes, of course.

Where are my shoes?
Blinking heck! I knew I had them at circuit day yesterday BUT where the heck did I put them!! Not in car, Not in bag ……… Flaming Nora! They’re still sat at the side of the circuit! You burk! … and yes I only have on pair of cleated shoes.

What to do … take the flat pedals off old bike ‘blue’ bike and put them on ‘birthday’ bike, no problem. Chuffing nora! Try as I may these pedals were not coming off. Rollocks! Aaarghhhhh!

I pumped the tyres up on ‘blue’ bike and off I went. It felt strange, after wearing cleats for so long to now cycle in trainers on flat pedals. I kept twisting my foot when coming to a stop, forgetting I was cleatless.

Hard BUT Happy
I met up with Melvyn and relayed my mornings escapades to him and apologised for what I would produce on our ride in the way of effort. (not daft me, have all my excuses prepared!)

I told him I needed hills in preparation for my next challenge and between us I think we put enough hills into our route.

Sandy Lane, Wakefield, where I keep being told to go up and now I know why! It certainly goes up and up.

With my plod away approach we eventually made it to Emley Moor Mast. It was a little misty BUT it didn’t stop us having a lark whilst ‘I’ recovered! 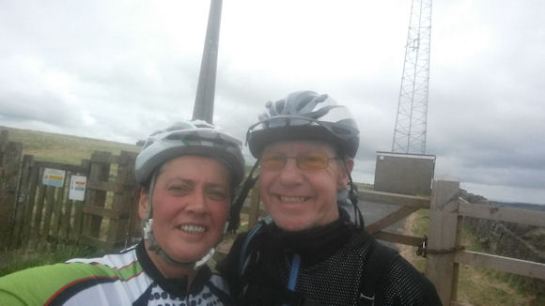 Bit of a mist with Emley Moor Mask in back ground 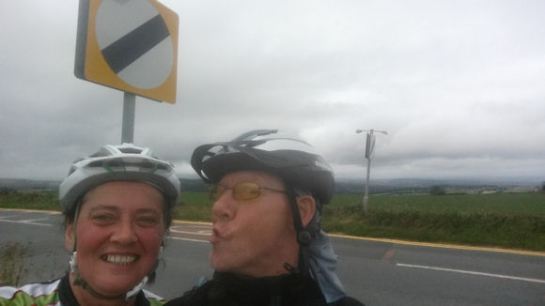 Castle Hill is some where in the distant mist, think the wind caught Melvyn’s lip 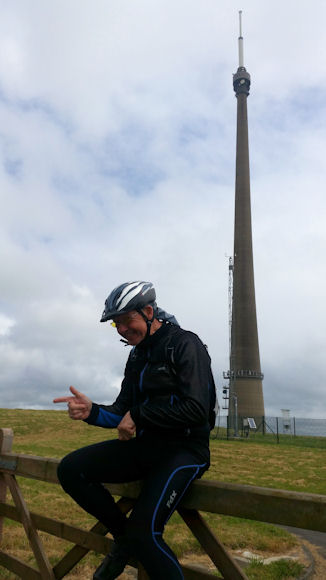 We hadn’t realised that there was a triathlon taking place from Scissett Baths until the odd rider past by, sporting a race number. A group of cyclists joined us to cheer the participants on. On the route we had in mind, it would take us through Scissett so we decide that would be our ‘brew stop’ to watch the tri transitions.

The Chase
On reaching Upper Cumberworth it was … wheeeeeeeeeee, all the way down into Scissett.
Think it was just as we came through Denby Dale, we spotted two of the triathletes in the distance.

It’s the carrot thing, isn’t it?

Melvyn set off in chase. I thought to myself, you’ve got to try and catch at least one of them! Whether I did or didn’t wasn’t the point, it was all about the chase and giving it a go.

With ‘blue’ bike (or my sit up bike as Sileas refers to it) clunking like mad, arms outstretched along the extremely wide handle bar and my backside a tad irritated from the long grass seeds that were now wondering around my shorts from ‘a call of nature stop’, I set off to see what damage I could do.

Melvyn was my aim BUT when he over took the first rider I focused in on the black tri bum ahead of me. Every time I thought I was closer he’d get away again. It didn’t matter that this guy had already done a tri swim and was about to do the run section, I needed to catch him.

With .4 of a mile to go (I looked on strava), I got him! Shallow victory as he was doing a triathlon BUT it made me work and push harder to make the catch. Lucky this was also our brew stop.

Are we done yet
We didn’t have many stops BUT when we did they were long as we set about having a great gas and putting the world to rights. A mind of mechanical information that Melvyn and I was certainly glad of it. 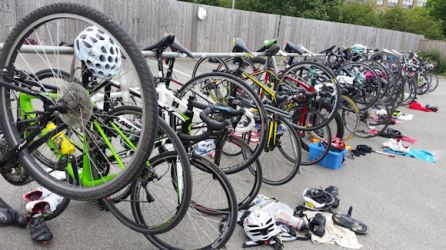 Hang your bike and grab your running shoes! 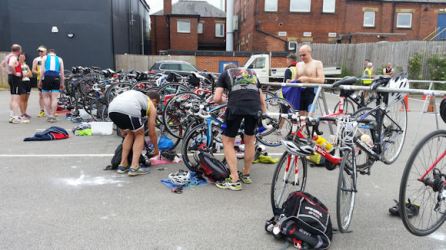 After prising ourselves from the comfort of the café, I stupidly assumed we would be cycling 2 miles flat with then a mile up to Bretton roundabout, drop down the other side and flat for 5 miles, finishing with about 10 easy miles … that was the plan in my head anyway.

A shout from behind .. ‘we can go left on here, back up towards Emley if you want, saves us riding on the flat’.

What the ‘uck!’… I know that road, Woodhouse Lane, BUT, only to come down it and it’s blinking lovely. UP!! Flaming Nora!! On Strava it’s called ‘Blast up to Emley’. There was NO blast what so ever involved in my ascent of this never ending climb. 7 miles UP, then it dips and then, to pour salt in your eye, it goes up again!!!

I didn’t quite make it to the top without a stop for a bit of phlegm chucking BUT then away again.

When Melvyn finally allowed us back down into the flat lands we bumped (not literally) into Jay and the Hunt brothers going home or rather to the pub after their Calder Clarion Sunday club ride. They’d only done 70 miles, call that a ride, I wouldn’t have bothered!!! (if only I could).

We’d taken so long on our ride (I had) that once we were back in Wakefield Melvyn shot off to cycling another 10 miles home before it got dark.

….BUT what a lovely day. It was hard BUT the great company and encouragement of Melvyn made the day …. Laugh …. I nearly bought a round!!!!!

SO .. What IS your Challenge
…I hear you say!!
On the 24th August 2017 I am attempting to cycle up Mount Etna in Sicily.

I still don’t know exactly how high it is BUT from where we’ll start (Jay doing it too, we’ll be riding individually though) it’s about 11 miles to the top and about, ooooh, so high!! At the time of writing this I can’t remember what I was told, think I blocked it out BUT 18,000 seems to ring a bell. I do hope that is centimetres and not feet/metres or any other measurement other than inches!

Now it’s out there I will at least have to try! And I will, honest!! So if anyone near me would like to help me out hill training I would be very grateful.

Thank you for reading my waffle. If you would please share it. Like it (or not)by scrolling further down and think you click on a star?!

Take care, smile and if you want to do it, do it, don’t let anyone stop you.
Jo x

4 thoughts on “And so it begins..The Next Challenge!”